How was the Ohio State game weekend experience? Find out in this first (but hopefully not last) installment of Hokies on the Road as three Gobbler Country writers traveled to Ohio Stadium and documented their trip. This week's edition will be a three-part installment from contributors Ryan Gold (@ro24kt), Michael McDaniel (@mikem92VT) and Justin Cates (@bestcates).

The Belly of the Beast

According to some knowledgeable Ohio State fans, the uber-wealthy arrive within the last hour before game time.  Here's the parking lot with plenty of premium spaces left 90 minutes before kickoff: 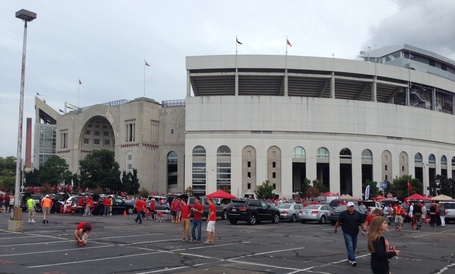 We had decent seats and it made for a terrific sunset brought to you by America: 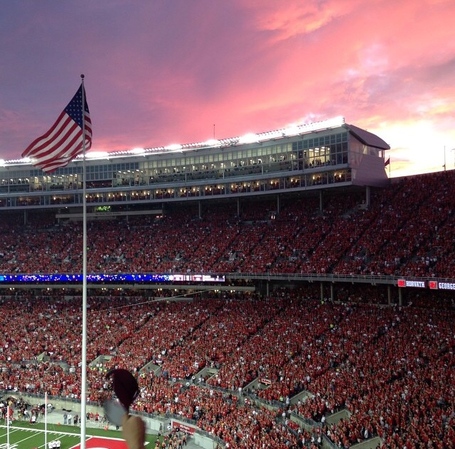 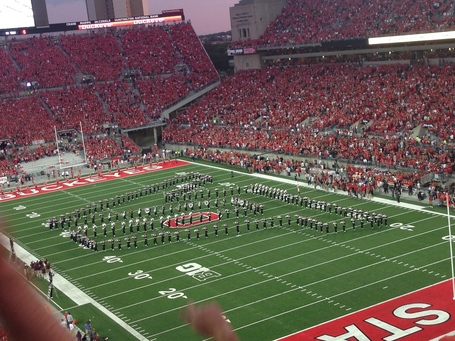 The Gobbler Country community has already posted a number of articles about the game itself, so I will just echo them and say I was impressed with Brewer's ability to shrug off mistakes and score when the momentum had swung in Ohio State's favor.  Bud Foster's defense is full of wild men and he's so good at coaching them up I feel like they will be in one of the next Geico "everyone knows that" commercials.

Seeing the Ohio State band-The Best Damn Band in the Land (TBDBITL) do the Script Ohio was very cool, and they even formed a "VT" and played "Tech Triumph" before kickoff, but halftime was unbelievable. I know TBDBITL is known for this stuff, but it was damn impressive in person.  Here's how it looked from the press box and I promise this is worth your while:

The game experience was phenomenal, but then again, winning will do that.  The crowd was loud, fun, engaged and there were plenty of fellow Hokies in the record crowd attendance of 107,517.  Replays were shown after every down almost.  Chanting "Let's go Hokies!" over and over never got old.  The cops even showed up at one point to tell our section not to do crowd surfing pushups.  For the record, it was another group of fans, but what did they expect after that performance?

Even before victory was at hand, there was some celebrating thanks to Bucky Hodges.

"It had had been on my mind, and when I finally scored, I just felt like I had to hit the dance," Hodges said. "The coaches were hot, and they were letting me have it. ... Was it worth it, though? Yeah."

Well he got himself a Wednesday morning haha

Hopkins is undoubtedly referring to wind sprints that coach Beamer enforces every week on Wednesday mornings for players who have made "mistakes."

Bucky Hodges' 6 am for his TD dance Wednesday will be 16 100's & more. Still says it was worth it, though his dancing days are done. #Hokies

Frank Beamer playfully called him out after the win.

"We’ve got some things to clean up—excessive celebrating for sure," Beamer said. "What’s the penalty? Well, we’ll show it to the team, and we’ll see how Bucky dances. And then he’s got an appointment with me on Wednesday morning at 6 a.m.  We’ll check his dance moves out then."

The game was everything I would hope for it to be. Obviously an outstanding defensive performance by the Hokies and incredible poise shown in a hostile environment by Brewer. Outside of the game itself, I was amazed by the amount of people. I have never been in attendance at a stadium that held 100,000 plus. The crowd lived up to the hype, especially on third down when "Hell's Bells" echoed throughout the stadium. It was one of the loudest games I have ever attended, so I can't even imagine a game against their arch-rivals, Michigan.

Additionally, I was amazed by the Buckeye band, far and away the best band in the country in my opinion. The highlight of their performance in my eyes was seeing them spell out Ohio in script, as they do before every home game. The whole experience during the game was very impressive.​​ 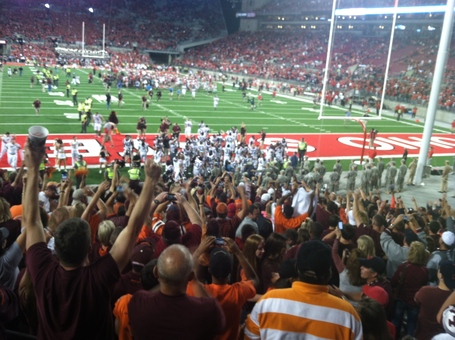 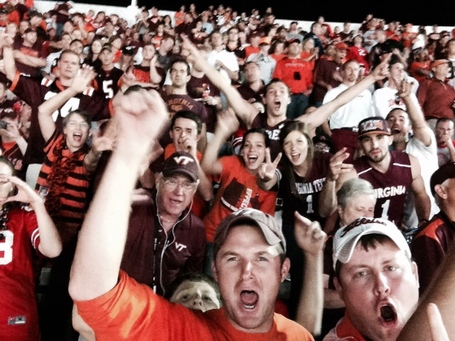 Somehow in this series I've become the grumpy old man because I wasn't terribly impressed with the Ohio Stadium experience.

It's very big, that much is clear immediately. Despite that I wouldn't put it close to the loudest stadium I've been in. LSU's Tiger Stadium was much, MUCH louder when the Hokies were thrashed there in 2007 and that place only held a little over 92,000 at the time. FedEx Field was also considerably louder for the Boise State game and that was "only" 86,587 people.

The Tech fans certainly weren't the issue. I was quite proud of the turnout and the noise made by the Hokie section throughout the game. In the upper deck we stood and cheered throughout and judging by the pictures I was very close to Ryan's seats. 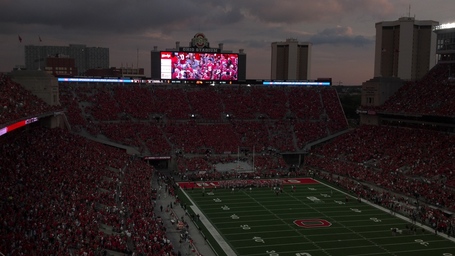 Oddly, the Buckeye faithful were generally subdued even when their team was on defense. That left a number of eerie lulls in the stadium punctuated by a horrible flashing scoreboard that could have grounded planes. I was personally offended when with a touch over four minutes the Hokies got the ball back up a touchdown and OSU fans started leaving the upper stands in droves.

That's a metric ton of time remaining with the game still in doubt. I get that people were frustrated, but you don't leave early. Not to beat traffic, not to avoid shame or heartbreak. Maybe if your wife goes into labor you can duck out, but if you're at a football game and that happens you're already in trouble, so might as well stick it out right?

Still, Ohio Stadium is a fine place to watch a football game. It's a nice blend of old-timey stadium charm and modern amenities (complete with $7 bottles of water) that makes for a pleasant gameday.

Plus I finally got to do my Keith Jackson impression and really mean it when I said, "On the banks of the Olentangy...". He's the greatest voice of college football and I miss him on Saturday's.