How was the Ohio State game weekend experience? Find out in this first (but hopefully not last) installment of Hokies on the Road as three Gobbler Country writers traveled to Ohio Stadium and documented their trip. This week's edition will be a three-part installment from contributors Ryan Gold (@ro24kt), Mike McDaniel (@mikem92VT) and Justin Cates (@bestcates).

So scratch everything I said about the Ohio State fans being friendly. They are nice people until their team starts losing, and then they are extremely rude. I can't say I have ever had to get in a verbal altercation with a middle-aged man for being rude to my girlfriend at a football game. Some fans were still nice to all of us, but most were visibly angry at our cheering for the Hokies as we pulled one of the biggest upsets for our school in quite sometime.

Aside from the fans, the atmosphere got more and more hectic after Donovan Riley ran back the interception to seal the game. From that point forward, Ohio Stadium became Lane Stadium North: Nothing but Hokie fans. The Let's Go Hokies! chant went on for about a half hour straight while we all partied down near the field with the players and the final seconds went off the clock. After the team exited the field, all of us Hokie fans exited towards the parking lot, but the cheering continued. Fans were high-fiving one another, whether they knew each other or not, and it was a great way to cap off a successful trip.

Ohio State’s most popular bar is The Varsity Club according to a number of OSU fans we spoke to while tailgating. This is their version of "TOTS."

Hokie fans basking in the victory at The Varsity Club: 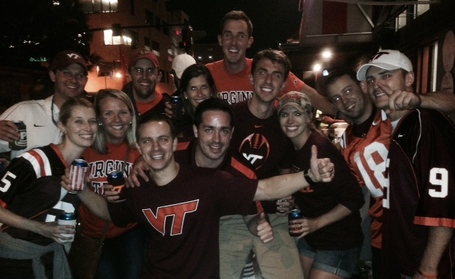 Imagine a bar that has a large outside area over asphalt, but instead of walking on crushed peanut shells like some restaurants in the southwest, you walk on crushed beer cans. The Varsity Club was a fun environment and even after the game Buckeye fans were congratulating us—like we actually had something to do with our players' terrific performances—and giving credit where credit was due. Once again, thank you Ohio State fans for being so classy.

Our 2014 season just got a whole hell of a lot more exciting.

This was one of the best Virginia Tech football games in our program's history. In between the 13 total hours in a car, two sub-par hotel rooms, a terrific stadium and tailgating experience, plus the best fans I've ever met outside of Blacksburg, our beloved Virginia Tech Hokies reminded the college football world that we're still a force to be reckoned with.

Three days after the game my throat still felt like I had been gargling with driveway gravel. The trip was totally worth it.

One more time for good measure, everyone Shmoney Dance like Bucky.

As we began to descend down the half-mile of stairs from the upper reaches of Ohio Stadium, I randomly locked eyes with an old college buddy named Jeff. We used to do a sports talk show on WUVT and running into him was completely unexpected.

Hours later, Jeff apparently wound up in a photo with Ryan at The Varsity Club as he's the one wearing the orange number 18 in the shot above. Hokie Nation is both massive, and incredibly small.

As all the Tech fans spilled out into the main concourse some enterprising fan realized we were in the cavernous, concrete underbelly of one of the largest stadiums in the world and it probably echoed.

"Let's Go Hokies!" bounced off the walls tormenting the Buckeye faithful just a few moments longer. We wandered away from the stadium running on a very thin mix of euphoria and adrenalin, not entirely sure where we were headed.

The buses were no longer running (epic planning, Columbus) so we walked back past the places we were in earlier in the day. They were all packed so we went into the first place that had floor space. I genuinely have no idea what it was called, but we drank a handful of beers waiting for one of the ride-sharing apps to start working on the only phone we had that wasn't dead.

I remember watching highlights of the day's games and being livid that ESPN spent 10 minutes covering Pat Haden and Steve Sarkisian complaining about something (we had no sound) but quickly glossed over our huge upset with four or five plays shown. Typical mothership nonsense.

We got a ride at some point but it's hazy and hardly seems real. To be in that place was one thing, but to witness quite possibly the greatest win in Tech history is quite another. I don't mean to spout hyperbole, but it really is right up there with beating Texas in the '95 Sugar Bowl in terms of defining the program on the national stage.

It was a great experience overall and I hope you've enjoyed us relaying our tales this week.

Now, on to the next one.