Impressive to say the least, it appears that the Bristol region is going to be prepared to host this game, unlike some other major events like the World Cup and the Olympics ;)

Got a copy of a press release which I will embed quotes from below, as well as a picture of a giant clock tower installed near the state line that is counting down to the Battle of Bristol, on September 10, 2016 when Virginia Tech will face the Tennessee Volunteers. 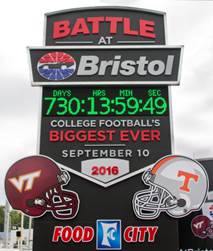 Other interesting things from the press release include:

With all the excitement so close in our rear-view mirror, it's tough to look down the road but our administration has been working towards this for a long time. You should read the link below for more info and more pictures.

Here are some quotes from Coach Frank Beamer:

On what it means to the Virginia Tech football program to play in the Battle at Bristol:

I think having that clock and seeing that (Virginia) Tech helmet right across from a Tennessee Vols helmet, I know our fans will take great pride in that being on display … in this part of the country it probably doesn't get any better than that.”

Frank Beamer on the feedback he has received from fans and players about the Battle at Bristol:

“Nothing but excitement. We’ve got a couple displays here in our hallways at Virginia Tech. It is generally talked about just about every day. Certainly with recruits coming in, it’s generally talked about with each and every one of them. We'll use it in recruiting, and I'm sure Tennessee is the same way. To play in such a special game and to come be a part of that is a real drawing card for our football program. We're going to use it as much as we possibly can.”

Frank Beamer on what it takes to get Virginia Tech fans excited about the Battle at Bristol:

“Hokie nation usually rises to the occasion. They did this past weekend. We took a bunch of folks up to Ohio State, then they celebrated in the streets —our students did — after the game. We had about 1,000 to 2,000 students who met us here at 4 o'clock in the morning when we got back, so our fan support usually is there. I can promise you, the closer it gets, the more excited they will be over the biggest game ever in college football.”

I for one can't wait to make the interminable drive down 81 from DC in 2016, let's get as many Hokies there as possible!

Have a great Friday, all!