Where the Vicks Rank Among Other Quarterback Siblings

Quarterback siblings will be ridiculed, compared, scrutinized and constantly reminded of their family’s history. For the Vicks, they have had their share of nefarious off the field activity, and people will always wonder what could have been if they both stayed out of trouble.

Share All sharing options for: Where the Vicks Rank Among Other Quarterback Siblings 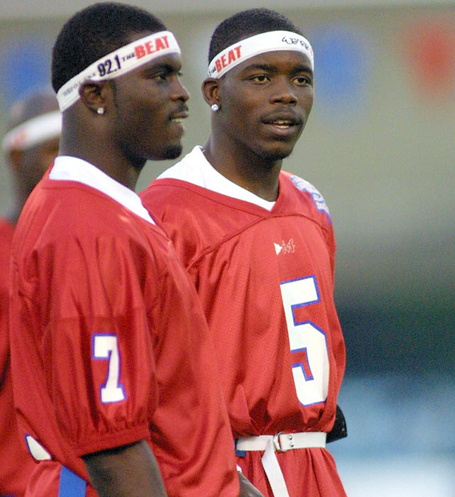 The quarterback position is the most demanding in football because of the patience, poise, intelligence and athletic ability that is required.  In the NFL, all of these factors are multiplied, making the position the hardest to excel at in the league. Due to the unique demands, it is no surprise that many people are not cut out to be NFL players, let alone a quarterback.

Given the scarcity of quarterbacks who make it in the NFL, it is even rarer for a family to have multiple members in the profession. As if the regular duties of a quarterback weren't enough, quarterback siblings are constantly compared, ridiculed and in the media spotlight due to high expectations, a family legacy or an infamous relative.

For Michael and Marcus Vick, their Virginia Tech careers are full of highlight-worthy plays, but off-the-field behavior prevented them from becoming more successful NFL players. With NFL rosters now set at 53 players per team, let's have some fun and see where the Vicks rank among other quarterback siblings. 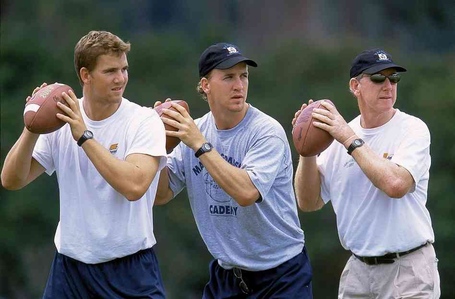 No surprise. They have fantastic commercials, numerous endorsements, starred on SNL, have NFL records and Manning faces, but most importantly, Super Bowl rings. Their dad, Archie, who shows up everywhere his sons are, had a 14-year career in the NFL and was a two-time Pro Bowler himself. Peyton and Eli's brother Cooper was a wide receiver in college, but a rare spinal condition did not allow him to pursue a career in the pros. 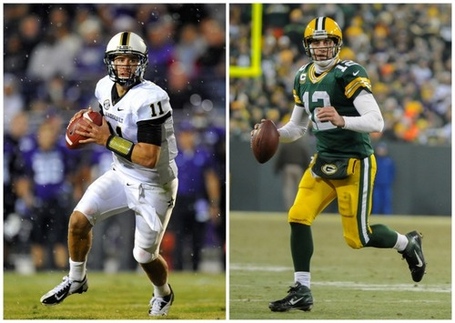 Jordan's Credentials: 12-8 as a starter at Vanderbilt with a 24:15 TD-INT ratio while adding six rushing touchdowns.

Aaron, aka Mr. Discount Double Check, was held hostage on the sidelines for three years as Brett Favre's Green Bay career ended. With Favre out of the picture, Aaron guided the Packers to the playoffs for five out of the last six years and is in the prime of his career.

Jordan bounced around NFL training camps in 2013 and 2014 and was released by the Miami Dolphins this summer.

Matt spent most of his career in Seattle, helping the Seahawks emerge from their irrelevance of the 90s to a regular playoff contender and their first Super Bowl appearance. In his 10 years as the starting quarterback, he led Seattle to the playoffs six times. He is also known for making this brash statement before losing in OT to the Packers in the 2003 NFC Wild Card game.

Matt is currently backing up Andrew Luck (who knew?!) in Indianapolis while Tim is a fantasy football analyst for ESPN. Tim only started five NFL games while on four different franchises before retiring in 2007. Don't feel too bad for Tim though as he's married to her.

Stephen's Credentials: 0-1 record as Vanderbilt's starter this year; transferred from LSU after only one game appearance in two years.

Philip Rivers has made the playoffs in five out of eight years in San Diego, but with the variety of offensive playmakers—LaDanian Tomlinson, Antonio Gates and Vincent Jackson—he has never been able to lead them to a Super Bowl title. Part of the problem has been the defense, but many Chargers fans would be quick to point the finger at former GM A.J. Smith and former Head Coach Norv Turner for failing to capitalize on their athletic abilities.

Younger brother Stephen is just starting his college football career. After spending two years as a backup with LSU, he transferred to Vanderbilt and lost his first start to Temple this past weekend, completing 12 passes for 186 yards and an interception. 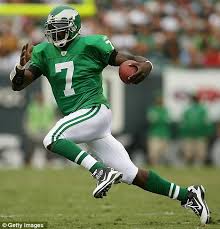 Marcus' Credentials: 11-2 in his only year starting for Virginia Tech. Finished his college career with a 19:15 TD-INT ratio while adding six rushing scores and even a receiving touchdown.

Michael Vick exploded onto the college scene in 1999, with his National Championship performance making him a household name. He was drafted first overall in 2001 by the Atlanta Falcons and led them to a huge upset over Brett Favre in Green Bay during the Wild Card round, where the Packers were a previous 14-0 in the playoffs. Since the fallout of his involvement with a dog fighting ring and subsequent jail time, Vick resurrected his career with the Philadelphia Eagles from 2009-2012. He is currently the backup for the New York Jets, much to their chagrin.

Marcus took the quarterback reins from Bryan Randall in 2005 and created a highlight reel comparable to his older brother's. He led the Hokies to the ACC's first conference championship game where they lost to Florida State. Four days after Tech's 2006 Gator Bowl victory, the younger Vick was kicked off the team for various infractions, both off and on the field. After being signed as an undrafted free agent by the Miami Dolphins following the 2006 NFL Draft, he never played a down as quarterback before being permanently out of the NFL.

Carson, like Matt Hasselbeck, was able to right the ship for a struggling franchise in Cincinnati.  The Bengals had a 15 year playoff drought before Palmer was able to lead them into the postseason.  He tore his ACL in his first playoff experience—a loss to the Pittsburgh Steelers—and was traded to the Oakland Raiders a few years later.  Palmer is currently the starter for the Arizona Cardinals.

Jordan has been a journeyman backup for Washington, a brief stint in the AFL, back to the NFL with Cincinnati, Jacksonville, Chicago, and finally Buffalo before being cut this past Friday. 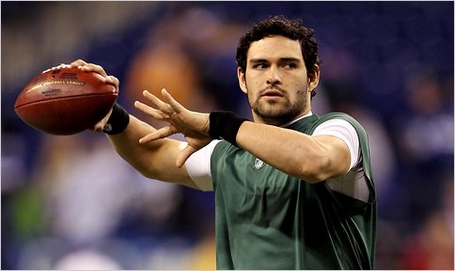 Nick's (Law) Credentials: played quarterback for Yale and is now a lawyer.

Mark defied the odds and was immediately successful in the NFL as a rookie, leading the New York Jets to back-to-back AFC Championship games in 2009 and 2010.  Since then he has not been as fortunate, compiling a 14-17 regular season record and missing the 2013 season with a shoulder injury.  While Sanchez is still fairly young, he now backs up Nick Foles in Philadelphia, waiting for another opportunity, lest he be known for the "butt fumble" the rest of his life. 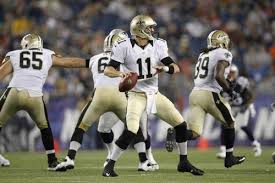 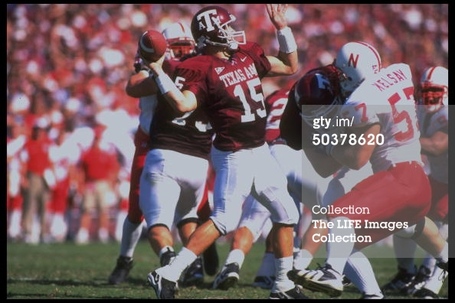 Luke's Credentials: Led NCAA with a 66.1 Pass Completion Percentage at Louisiana Tech.  2-7 regular season record with a 9:14 TD-INT ratio in the NFL

Randy's Credentials: Led the 1998 Texas A&M Aggies to their first and only BCS Bowl appearance and Big 12 Championship to date.  22:14 TD-INT ratio and added six running scores in his college career.

While Randy never went pro, Luke and Josh have been serviceable career backups in the NFL.  Josh parlayed his success last year (3-2 as a starter with a 13:1 TD-INT ratio) with the Chicago Bears when Jay Cutler was injured to a starting gig with the Tampa Bay Buccaneers this upcoming season.  Luke is currently Drew Brees' backup for the New Orleans Saints. 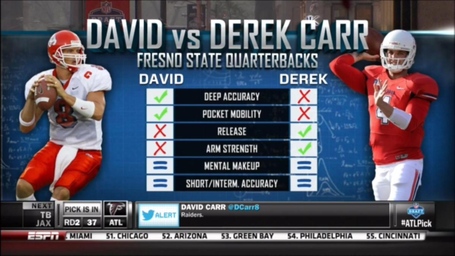 Fresno State graduates and highly touted NFL prospects, the Carr brothers share the familiar responsibility of high expectations as rookies.  Older brother David was the first draft pick for the Houston Texans' franchise back in 2002.  Derek was chosen by the Oakland Raiders in the second round of the 2014 NFL draft and was recently announced as the starting quarterback over veteran Matt Schaub.  While David hasn't been on an NFL roster since August of 2013, time will tell for Derek and his professional career. 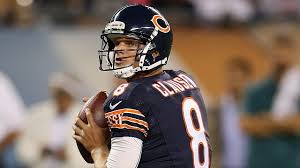 Jimmy's Credentials: 1-9 regular season record and a 3:9 TD-INT ratio in the NFL.

Both Casey and Rick attended the University of Tennessee, but Jimmy was the standout at Notre Dame. Rick never had an NFL opportunity, Casey was on the Kansas City Chiefs' practice squad in 2004 and younger brother Jimmy was taken in the second round of the 2010 draft by the Carolina Panthers back in 2004.  After a sub-par rookie season, Cam Newton was drafted and Jimmy hasn't started since and is now backing up Jay Cutler in Chicago.

Chris and Matt Simms - their dad has a Super Bowl win, but the Simms brothers have bounced around a few NFL teams.  Currently, Chris is a commentator for CBS and Matt was signed to the New York Jets' practice squad on August 31.

Colt and Case McCoy - After illustrious careers as Texas Longhorns, Colt is the third-string quarterback for the Washington Redskins, while Case works for a real estate company in Austin, TX.

Mike and Sean Glennon - Sean was not a fan favorite at Virginia Tech, but he did bail us out a few times—most notably in 2007 when Tyrod Taylor was injured and he thrashed Georgia Tech (in their uniforms), and his ACC Championship game MVP performance later that year.  Mike Glennon is currently the backup-in-waiting behind Josh McCown in Tampa Bay.

Ryan and Brady Leaf - Ryan was in and out of the NFL like a flash in a pan and provided us with this epic freak out. His brother Brady was a three year player at Oregon, but was not a consistent starter and never went pro.