A look at the basic elements of this year's offensive system for Ohio State and three keys to defending those staples.

Editor's Note: Welcome to new writer Bobby Boogie. He is going to break down some Xs and Os for you, an element and a  luxury we were lacking prior. Enjoy!-- Flyers13

When one hears the term "spread offense", generally one envisions 50+ passes, with little to no running game.  Ohio State (and all Urban Meyer teams) is instead a run-first team, one that uses formations, pre-snap motion and splits to increase success on the ground. With an experienced QB who possesses a strong arm, a mid-range to vertical passing attack becomes an additional headache for defensive coordinators to defend.  Fortunately for Bud Foster and the VT defense, J.T. Barrett currently lacks experience or dynamic play-making ability.  Saturday, Ohio State will concentrate on establishing control of the line of scrimmage, wearing down the Hokie front seven, and attempting to allow Barrett to manage a conservative passing attack.

First, this year Ohio State has altered their base formation, using a tighter formation with fewer wideouts and less pre-snap motion. 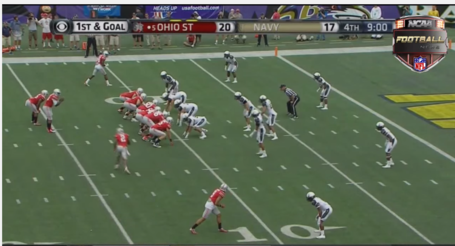 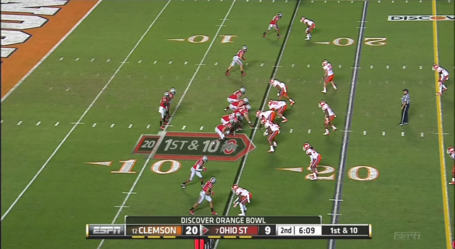 As you can see, the formation used against Navy has six men in the box, unbalanced to the right, while the Orange Bowl line is five, with slightly wider splits and four receivers split out balanced.  While both formations pull seven defenders into the box, the Navy look allows the linebackers to key towards the strong side.  Clemson's linebackers remain wider, shading towards run-support while still covering the slot receivers.  The Orange Bowl look is generally more difficult to defend but the formation used against Navy is a successful run IF the defenders overload to the strong side. When the play goes weak side all three linebackers are sealed by the two right-side linemen and the tight end.

Saturday night, Ohio State will use a standard pre-snap formation and motion that is a hybrid of the two shown above.   While they will occasionally show four wide, they should primarily utilize an unbalanced line with two receivers split wide and a RB/WR in motion. This will force Coach Foster to leave both corners on an island, with only free safety help deep, shading to the strong side post-motion, while bringing the other safety up as additional run support.

IF Virginia Tech’s defense is successfully stopping the inside zone read, Meyer will start utilizing his motion rb/wr on the jet sweep, running off the corners with vertical routes.  Possibly the most dangerous player for Ohio State is Dontre Wilson, who is capable of taking any run, pass or return to the house.  Wilson will be heavily utilized in the sweep, either as a decoy to occupy an inside defender or finding running lanes on the outside

Finally, if Foster does keep his defensive backs in single coverage and Ohio State is still able to move the ball on the ground consistently, the VT corners and safety will start "cheating" towards run-support.   The speedy Buckeye wide receivers will take advantage of any leans, as seen in the following highlight from the Navy game last weekend (watch the corner release the go route, leaving only the free safety, who takes a step forward and a bad angle, getting beat for an easy touchdown).

2) Keep a close eye on Buckeye TE Jeff Heuerman.   When they are lined up unbalanced with Heuerman to the strong side, the run usually goes weak side.

3) Watch the depth the motion back takes; if flat, he will run a sweep/outside zone read.  If he bubbles back slightly, expect a swing pass.

Overall, defending Urban Meyer’s spread is extremely difficult.   When marshalled by an extremely talented and experienced QB like Braxton Miller, it’s almost impossible to stop.  However, Miller’s absence and the lack of experience and cohesion on the offensive line could allow Foster’s troops to hold the Buckeye’s below their normal expectations.