I probably shouldn’t read anything into it. Both Scot Loeffler and Bud Foster profusely sang the praises of Ohio State in their weekly interview. And rightly so. No surprise there.

But I noticed that the phrase "top five" kept popping up. No surprise there, either, I guess. Foster was very respectful in tone, speaking of Ohio State as having a top five football program. Loeffler, a Michigan man, was deferential as well, very sincerely.

Loeffler respects Urban Meyer. He coached for Meyer at the University of Florida. It’s more than that, though. Loeffler also holds as "top five" the college football atmosphere on gameday in Columbus. He’s a fan of college football, too.

So no big deal. It’s quite obvious why "Top Five" might roll off their lips in reference to Ohio State.

Except Frank Beamer is famously & infamously – somehow both apply here – 1-28 vs. the "Top Five." He probably wakes up at night hearing that phrase. He does not want to be remembered for that.

We might as well get it out there. We all know that’s what they call us behind our backs.

A win against Ohio State would be a BIG DEAL to Hokie Nation. It might just propel the team to a memorable season. I mean the kind we want to remember.

Now it wouldn’t quite be a "Top Five" victory in the 1-28 sense. Ohio State is currently ranked #8. So Beamer would only get "Top 10" credit in that sense. But it might be "Top Five" in its implications for the way we come to regard the final years of Frank Beamer’s coaching tenure. 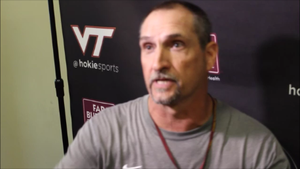 Bud Foster looks intense. No surprise there. But I mean more than a little. Think he’s heard that top 5 crap so much – Loeffler too – that it’s not only genuine praise for Ohio State spilling out of them, but also a motivational mantra they’ve been uttering for this game?

I admit. It’s a stretch. Perhaps a little too Freudian.

Nonetheless, what I hear in Foster’s voice, demeanor, and remarks, all screams "Top Five" opponent to us. A victory might not change Frank Beamer’s record in a way that reverses the 1-28 curse. But it might put a Lunch Pail-sized dent in it.

Beamer’s window of opportunity for winning a game against an elite program and coach is slowly closing. It’s going to swing almost shut, if we witness another LSU-2007-on-the-road-like catastrophe.

Just in case, God ordained that "much better" games would be on at the same time. Of course, Notre Dame plays in one of those games. God likes this Pope.

But even He doesn’t know which Hokies team is going to show up in the Horseshoe.

Reading between the lines, it seems like this game is much more important to Virginia Tech. What does that guarantee? Almost nothing.

Except a big chip on your shoulder.

Something to prove. And little time to prove it.

That’s a familiar feeling to Frank Beamer. He’s at home as an underdog. He is so supportive of underdogs, I sometimes wonder if he’s too nice, too loyal to the guy who has to overcome the odds. For instance, the little guy on a football field.

Beamer almost apologized this week for giving the starting nod to the Freshmen backs over the Mighty Mouse, J.C. Coleman – an exemplary person and dedicated player.

Why? That’s not necessary. The best player must play at each position. Case closed. Or it ought to be. No matter who it is.

A team has to be cohesive, too. So when I say, "best player" I certainly intend to include the player’s contribution to team chemistry, or lack thereof. I have no doubt at all that J.C. is one of the very best players on the team, in this regard. He’s a player’s player.

I’ll take J.C. any day over a player with off the chart verticals, great size, and an imposing physical presence, who fails to pull his own weight.

I don’t know – let’s get wildly imaginative here. Say you have (or have had) a receiver like that who cannot be counted on to block for his running backs. He might, but he might not. This very unreliability undermines team chemistry, literally, during a play. How could that be good for team chemistry over the course of an entire game? A season?

Talking about a blow to the flow. Plays get blown up. Individual players try to do too much to pick up the slack. Things get "out of whack."

We lose our leverage.

It happens to the best of us, Frank. But seriously, Coach: here’s your chance.

Ohio State. Saturday night. Columbus. ESPN. This is Top Five for us.