Virginia Tech Hokies In The NFL: Week One Performance Roundup

One of your favorite features on the site returns as we tabulate and add insight into how your favorite NFL Players (ex-Hokies of course) did on Sunday (or Thursday or Monday).

Share All sharing options for: Virginia Tech Hokies In The NFL: Week One Performance Roundup

Yes, he played. He just had zero targets. Way to back your homey, Mr. Discount Double Check. When one of your best WRs calls out the (current) biggest loudmouth in the NFL, you have to at least throw it his way a few times, shoot just once even. Instead Boykin starts the season under a dark cloud, which mimics the same bad sign this Packers season was born under as they weren't competitive in the opener, losing 36-16. Hopefully, JB learned a valuable lesson this week and this season doesn't become lamentable and go belly-up. 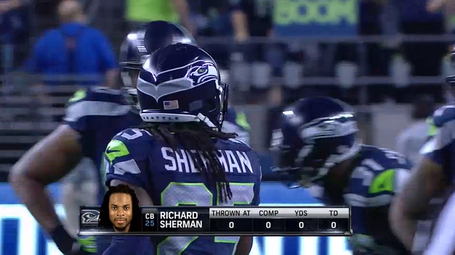 The Texans started off the season against a poor Redskins team that hasn't found a way to click on offense. The Houston OL only allowed one sack, and got Arian Foster over 100 yards (something many never thought they would see again, and may still never, but it was the Skins, so yeah it happened). He was charged with keeping Orakpo and Kerrigan off of Bills QB castoff Ryan Fitzpatrick.The pair got just 7 tackles, with none for loss. Sounds like a typical efficient, quiet day for Mr. Brown, who is among NFL Network's top 100 players.

11 tackles, 8 of them devastating solo tackles, he kept everything in front of him, and continued on his path of excellence. Stories are abound about Kam and his philanthropy in both his hometown and Seattle. He is also serving as Richard Sherman's interpreter for the coaching staff and really keeping that D on an even keel, though it's constantly at the center of controversy. Heck, Seattle loves him so much they even had a quote saying Kam could play QB for Seattle in a pinch. How this guy was a two star going into his SR of HS will never fail to confuse me.

Did not record a stat, rumors out of Minnesota are that he has tremendous athleticism, but as of August 16 it was being reported that he didn't have the rotations at Safety down and was struggling some in his transition from S to CB. He made the 53, but he has work to do before he'll contribute.

He will be tasked with keeping Larry Fitzgerald at bay. Though he has a new home and contract, he still has the same height and size. Without a decent pass rush, the problems that surfaced with him conceding possession receptions in KC will re-surface in San Diaaago.

An inauspicious debut, with 5 tackles, 3 solo. The Bears lost a home opener in OT to the Bills though, so ultimately a failure even though he hustled back from that ankle injury he suffered on the opening kickoff of the Jacksonville preseason game.

"It was quite evident the guy made plays," head coach Jim Caldwell said of Fuller's performance in the preseason. "He’s grown and developed. He’s got speed and length and he’s hungry."

He had six catches for 90 yards and 2 TDs in the preseason. If he can effectively swim in Calvin Johnson's wake, he could earn himself a nice raise for 2015. The #2 WRs that Detroit has surrounded Matt Stafford and Tron with are simply second-rate. Nate Burleson and Brandon Pettigrew, both of whom seem to serve as a final check-down after checking on Tron on the first three checkdowns fails to materialize. Detroit's RBs also vulture lots of receptions, between Bush and Bell that's 107 catches.

After his heroics vs Philadelphia last year during the playoffs, Graham didn't know for sure if he'd be back until just five days ago. And though New Orleans came up short on Matt Ryan's record-day, it was through no fault of Graham's as he converted both FGs (including one from 50) and all extra points. A good fantasy Kicker day to be sure. 10 points, + bonus for the 50 yarder in most leagues.

Three outcome D-Lo, pick, flag, or toast? What was yesterday? With 8 tackles, he kept Andre Johnson in front of him, allowing six catches for 93 yards, and a long of 23. He committed no penalties for a change. He is playing for a contract as he resigned but has no guaranteed money beyond this year. In a 17-6 loss, he played decently, but wasn't a difference-maker.

Suspended for the first four games of the regular season due to a violation of the NFL Substance-Abuse policy.

Peyton was sacked once, not sure who was responsible. Will is shuffling around a bit right now due to his versatility. No penalties.

Caught 1 pass for 9 yards on 3 targets from Cutler, who had a so-so day. With Alshon Jeffery and Brandon Marshall as the teams 1&2, to get targets at all is a good sign. Hopefully Morgan can feast on some single coverage this year.

Just picked up by the Browns on September 2, after being let go by Denver, Cleveland has him on the 53 man roster. I'm not sure if he played much in the Browns opening loss to the Steelers (due to learning system). He will earn three weeks minimum NFL salary for this move, regardless of whether or not Cleveland stashes him or cuts him.

Coming off his best season since catching 91 balls from Jay Cutler as a rookie in 2008, Royal had 8 TDs last year on just 47 catches, and had the highest ypc of his career, with 13.4 yds. A consummate professional, he expects to enter his prime (age 28) with a big year in his 2nd year in the Chargers new system.

Here one day, gone the next, back two days after that. Such is life on the fringes of the NFL. We have a running joke that we hope continues here at GC regarding D Tapp's ability to get one solo tackle a week. It's uncanny. No more, no less. As D Tapp was signed as a last minute short-term injury replacement, here's to hoping he produces with the limited opportunity ahead of him so he can go to whoever needs that one solo a game.

Once again Joe Flacco shows the world what it means to be an elite QB throwing 62 times in a loss with plenty of red-zone futility for effect.

"The main thing Tyrod has done is he’s moved the team," coach John Harbaugh said. "Tyrod has moved the team; he’s scored points. My brother [49ers coach Jim Harbaugh] has told me many times how you evaluate a quarterback: Can you envision and see how he’s going to move your football team? We can all see how Tyrod can move the football team. That’s how we’re evaluating him, and he’s done a very good job."

These are encouraging words from Harbaugh, who once described Taylor's past performances as "disappointing" last March.

We have very little patience here at GC for all things Harbaugh, and even less for the overly sensitive Flacco who seems unwilling to cede any 1st team reps to his understudy. I for one, can't wait for Taylor to get his opportunity down the line in a better situation. He's been permitted to throw just 35 passes in four years, with 19 coming in one game. As such, he has yet to throw his first NFL regular season TD.

After impressing the easily impressed Ron Jaworski with his preseason play during Week 1, causing the enthusiastic overstater that is "Jaws" to declare Thomas the most impressive rookie QB to date, Logan returned to orbit a bit. He started the final preseason game for the Cards, but is likely still the Cards #3 until the bottom falls out. But with an 11-5 club returning a great D, and featuring veteran Carson Palmer, this year's Cards will be going for break in a very competitive NFC West. We should be shocked to see Logan see a single meaningful snap until next year.

The Geno Smith experiment in NYC is not really working, and Mike Vick is happy as pie to sit and back up? This does not play well in the apple and it's surrounding swampy regions. Vick got a snap in yesterday and attempted a pass that went incomplete. But I didn't watch the game and have no idea about context. Wherever Vick goes, be it NYC or Mexico (see what I did there?), drama will be sure to follow. There used to be a word used more frequently in sportswriting, and I am going to use it here now: Mercurial. Mike Vick is mercurial, and news of him will move the dial until he is in a walker at the retirement home.

You hate to see a Hokie get injured. But I hope Eddie takes the time he is out to review tape of Casey Fleener murdering him, and then defacing his corpse during the Orange Bowl loss to Stanford a few years back. Does Flyers13 hold a grudge? You better believe he does! You should ask Ronyell Whitaker (.....if you can find him)

Sadly enough, this will be the final time I include his name in this segment. He is still under contract to the NY Football Giants, but he has been advised to quit the game due to the potential for long term nerve damage in his upper back/neck area. He (I am positive of it) is going to make a triumphant return to Track & Field and rep the US of A in 2016 or 2020 in the triple jump where he placed top 10 in the NCAAs in 2011, after having only spent minimal time training with the team.

He got flagged for a neutral zone infraction. One of many penalties incurred by an undisciplined Steelers team, but they were playing Cleveland, so playing down to the opponent's level is to be expected. 5 tackles, 3 solo, and 1 sack. Sounds pretty much like a typical day for the former Mr. Adjepong. Steelers were smart to pay him a bit, he'll be good for a while.

"Now I just got to keep being patient. I know my time is coming. I worked too hard for my time not to come. I’m about to continue working hard every day. Everybody will see 34 again."

The silly-donkey Cowboys kept just four RBs, and one is DeMarco Murray, who is the lead back. This team is doing it's level best to eliminate the run from their offensive lexicon. All plays must run through Romo. Hopefully, RDub gets a shot there, but more importantly he got the reps in the preseason and led the team in rushing and TDs rushing.

Ouch.This sounds like scoring an own-goal in International Football.

Becton played in one game last season for the Chargers, logging 17 snaps at left tackle in a Week 5 loss to the Oakland Raiders. He did well on the first 16 against Oakland defensive end Lamar Houston, a quality player who had 6.0 sacks last season. The 17th snap, however, he was bull-rushed into quarterback Philip Rivers, who threw a game-ending interception under pressure.

Stick with Gobbler Country as we continue to try to stay on top of all your Hokies in the NFL. We'll try to have this installment up earlier next week, but with so many still to go tonight, and all the excitement of the OSU win, we held it back a day. Follow me, Flyers13 @gobblercountry, where I will do my best to entertain and be entertained by all of you.

NFL isn't over yet, we still have two games tonight. I hope you enjoy them. Have a safe week back at work and school folx!