A look at the state of Hokie Football before and after the Ohio State game.

If you've been a Tech fan for the last 10 years, you're no stranger to big out-of-conference games. I'm not talking about bowl games. I'm talking about fresh-out-the-gates, early season games against high-profile, successful programs:

Each of those match-ups afforded Virginia Tech the opportunity to be on a national stage in primetime; but when you widen out the lens and adjust your scope beyond the scoreboard, each game was a measuring stick for the state of the program.

The further away from '99 we get, the more of a mockery that famed empty trophy case becomes. Michael Vick isn't running out of the tunnel to give hope to every Hokie that, whatever the deficiency, Vick's pure athleticism and will to win can make up for it. As a matter of fact, the past few seasons have begun with thoughts of, "In Bud We Trust", followed by prayers to God Almighty that our offense can just score 14 points and stay on the field long enough to give the defense some time to rest and catch their breath before fending off another attack. So has been the climate the past few seasons with little to no change in that mindset.

Heading into the LSU game in 2007, I had no delusions of grandeur. We were outclassed all the way, though I did not anticipate the unapologetic slaughter of all things Maroon and Orange that night. Before Alabama 2009, I felt like we would have a solid showing, but a victory would be surely out of reach. The Boise State game in 2010 always felt like a no-win situation. If we beat them, we were supposed to. If we lost, the world would continue to patronize Boise State and further bastardize Virginia Tech. If we never set foot in Fed-Ex Field again, it will be too soon. Then came Alabama 2013, and everyone on the planet seemed to treat that game as nothing more than a friendly scrimmage between Good ol' Coach Beamer, and that Genius in Houndstooth, Nick Saban. Virginia Tech lost that game before the first spring scrimmage.

Now, we have Ohio State 2014 and for the first time in years, I have a quiet confidence about this game. Scot Loeffler and Aaron Moorehead joined the staff a year ago, and I've found myself slowly letting go of that cringe every time the offense takes the field. The difference in the team this year is obvious to me, and with the Braxton Miller injury, there are others finally joining me in letting go. Aaron Moorehead is fiery. The WR corps has bought in, and between Moorehead and Loeffler, there is an expectation for improvement with this coaching staff. For the first time I can remember, we are going into a big out-of-conference match-up actually capable of winning the game. And let's be honest, that empty trophy case will forever stay empty unless Frank Beamer embraces some of the same philosophies as his new offensive coaches, stops protecting the kids' feelings so much, and lets them go out and be great.

There's an hour until kickoff and the hair on the back of my neck is beginning to stand up. It's the same feeling of electricity you get in the middle of an intense lightning storm. After lightning comes the thunder, and there will be a deafening roar in Columbus with upwards of 100,000 attending. They are in for a shock. (pun not intended, but useful) Bud Foster will call a tremendous game. We have D-Block in full effect on the back end of our defense, with our sensational sophomores- Kendall Fuller and Brandon Facyson, our stone-faced seniors- Kyshoen Jarrett and Detrick Bonner. We have something that no team in America has in Dadi Nicolas, and at some point tonight, you'll see Dadi being Dadi. We will get pressure on Buckeyes QB J.T. Barrett often. We'll get a few sacks, and we will give up some big scrambles. At the end of the day, our defense will get the better of this match-up.

We have a young, hungry offense full of talent and desire. We have Michael Brewer, Isaiah Ford, Cam Phillips, Bucky Hodges, and potentially the best backfield since Kevin Jones and Lee Suggs. Shai Mckenzie and Marshawn Williams are tough physical runners with great quickness for their size. If Jones and Suggs were "The Untouchables", then Mckenzie and Williams are the "Don't Wanna Touchables", because by the 4th quarter, defenses will want no part of contact with these bruisers. Mistakes will be made, but there will also be atonement and growth. I truly believe that tonight, we watch our program take that next step. Tonight, Virginia Tech wins in the Horseshoe.

After a day to digest exactly what happened in this game, the result is still every bit as sweet as the moment it happened. I tried to script this game in my head in the pre-game thoughts, and it came closer to that prediction than I could have ever imagined. D-Block showed up and showed out. For everyone giving Chuck Clark a hard time, go back and watch the game. Yes, he got burnt horribly on a play and made another mistake or two, but without his aggressiveness and toughness in run support, the Ohio State run game would have been far better, possibly good enough to change the outcome. I look forward to watching Jarrett play on Sundays next year, and we better enjoy watching Facyson and Fuller this year and next, because there are no guarantees how long they'll be in Maroon and Orange. What our front seven lack in name recognition and size, they more than make-up for in speed and desire. We all wondered if Dadi Nicolas would hold up against a big, ground-n-pound attack. The answer is an emphatic "Yes!". As impressive as Dadi was, how about Luther Maddy chasing down J.T. Barrett, when a cat blitz lost contain. Few teams in the country have a DT who can run sideline to sideline as well as Maddy.

Offensively, what more can be said about the performance of our young players, especially Michael Brewer? I received countless texts throughout the game, wanting to know where our offensive line came from, and who this new stud at quarterback is. There are already tons of great articles out there on our offense so I encourage you to read those for more info.

The most important thing I take away from this game is the fact that the Virginia Tech Hokies, and most specifically Frank Beamer, have finally changed their mindset and approach to big games. As mentioned above, these sorts of games have always been handled with extreme care by Frank Beamer as to not raise any sort of unreasonable expectations. Thank God for Loeffler and Moorehead, and even Whit Babcock to some degree. In the span of a year and a half, Loeffler and Moorehead have already made a massive difference in the culture of Virginia Tech. From practice tweaks, to recruiting efforts, to overall game strategy, these guys have been a breath of fresh air, the shot in the arm, and any other cliché you want to throw in that the Hokies had sorely been missing.

Last but certainly not least, let's give a helmet sticker to Frank Beamer. Beamer has been mindful of not closing out his career the same way Joe Paterno, Bobby Bowden, and close friend Mack Brown all have done: being pushed out the door rather than walking away at the right time. This has been the elephant in the room the past two seasons, and for good reason. However, without Frank's willingness to depart from his own blind loyalty to his former staff and make the difficult decisions, there would be no Loeffler, no Moorehead, and absolutely no victory at Ohio State. Not only has he brought in quality coaches, but he has trusted them enough to let them do their jobs without forcing them to do it his way. The old Frank Beamer would have sat on the ball the entire 2nd half, riding the defense until they broke, and watched yet another big game victory slip away in the final minutes. Those days are over. Beamer allowed the offense to attack when necessary, trusted his young players and staff, and was rewarded with one of the biggest victories of his career. 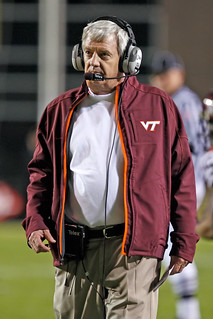 Hokienation has been hurt a time or two in the past, and fans are already looking at ECU as the trap game from Hell, considering how tough ECU has played the Hokies in recent years. This is a new era in Hokie Football. It started when Beamer broke character and fired most of his offensive staff and it continued Saturday night in Columbus. If the Hokies lose to ECU, it won't be because of awful coaching decisions or a "drawn-by-crayon" playbook. ECU is a talented team that gave USC-East all they wanted, and are exactly the type of team the Hokies need to play to force our guys to stay sharp and focused.

My thoughts on the weekend end with this: Thank you Frank Beamer, for building a program we can be proud of, for making painful decisions in order to see that program take steps forward, and for bringing excitement back to Hokienation.