This is my firsthand account of what happened in Blacksburg on Saturday September 6-Sunday September 7, 2014 when the Virginia Tech Hokies upset the the #8 Ohio State Buckeyes and the emotions that followed.

Not being able to afford a $100+ StubHub ticket and the money to travel to Columbus, plus bar and food money, I settled for technically the lesser but in my heart the greater experience. I drove down to Blacksburg on Thursday to visit and to stay with my old college roommate, Elliott for the weekend, and to ultimately watch the game on Saturday with some of my closest friends, most of whom remain nameless, because we were never formally introduced. But we still all know each other, right? We all bleed maroon and orange, jump to Metallica's "Enter Sandman," and pull out our key chains on third downs. We are all Hokies. It honestly turned out to be one of the most memorable and best days of my life.

My day started off with three cups of coffee, scrambled eggs, and College Gameday at nine o'clock Saturday morning. Oregon's campus looked wild and crazy on ESPN with its big celebration on live television, but it would be nothing compared to being in the greatest town on Earth that night after the Hokies pulled off the upset.

After breakfast, I met up with my friend, Molly to go on a morning run on the Huckleberry Trail. My favorite part is always when I run behind an old Virginia Tech practice field and see an empty Lane Stadium come into view with the mountains surrounding it in the background. I imagine the stands filled with screaming and jumping fans and "Enter Sandman," blaring through the PA system. It gets my blood pumping every time, and I couldn't stop thinking about kickoff hours in the future.

After working off the previous night's beer, I returned home and watched and waited for the crew's picks, and finally, Desmond Howard and the Oregon Duck picked the Hokies to upset the Ohio State Buckeyes. This made me giddy inside. I myself picked the Hokies to lose. Yes, call me a horrible person, but I was trying my best to be the realist that I am at heart. The Hokies tend to lose these types of games, but I told myself and all my friends that this is probably the best chance Virginia Tech has had in the past ten years to pull off a win versus a top ten opponent with Braxton Miller out, and the inexperienced Buckeye offensive line.

With Gameday complete, I sat on the couch and scrolled through the channels for an entertaining game, finally finding Nebraska versus McNeese State to be the most exciting, I stuck with it in hopes of an upset. It never came but was a nail biter at least. I sat through the whole game texting any worthy friend and tried to convince them to go grab a table at Sharkey's as soon as possible. Finally, a short time later I had a bite. My friend, Kyle picked me up after getting off of work and we made our way to the bar and grabbed a table in perfect view of the projector screen and all the surrounding televisions for the best seats in the house. We arrived around 4:40 that afternoon, and needless to say, we were well prepared as most people hadn't come yet. We downed some dinner, ordered a few cold ones, and commenced to text every friend we had in town to come join us in preparation for kickoff at eight o'clock.

Eventually, the rest of the Hokie faithful flocked to Sharkey's, and the whole place filled with maroon and orange. It was beautiful. I could feel the tension in the air as it was filled with oooooo's and ahhhhhh's, cheering, yelling, and cursing throughout the entire game. Now, I won't go into breaking down what happened during the game because we all know how it went down. But the pure excitement in Sharkey's that night was something I've never experienced before. Everyone was glued to the televisions and I think they all genuinely believed that the Hokies had a chance to win the game. But more importantly, everyone there cared. Yes, all the fraternity and sorority kids were there and doing their thing, and you had your people who were just there to get tipsy, but even the ones who generally didn't care actually did and it showed. People were excited about Virginia Tech Football again.

Toward the end of the game when tension was at its highest, chant's of "Let's Go, Hokies!" echoed through the bar. And the staff even played "Enter Sandman," a few times, which caused the whole place to start jumping, seemingly making the floor and tables shake.

But when the win was inevitable, the real feelings sank in for everyone. We, Virginia Tech just beat the #8 Ohio State Buckeyes. Technically, this was the best win by the football program in nearly ten years when the 2004 Hokie football team beat #7 West Virginia in Blacksburg and then #9 Miami, sealing Tech's fist ACC Championship during its first season as a member of the conference.

Yes, I was jealous of my old roommate and friend Ben Rosenthal, who was in attendance in Columbus and posted this picture: 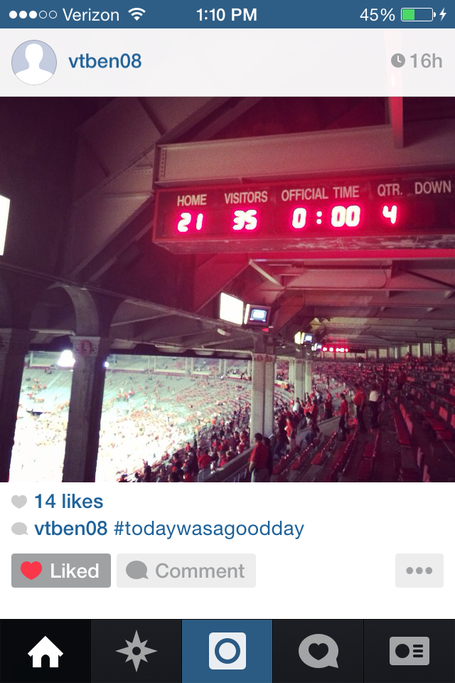 But what happened next in Blacksburg will go down as the most excited and the happiest I've ever been in my life.

The bar erupted with joy. 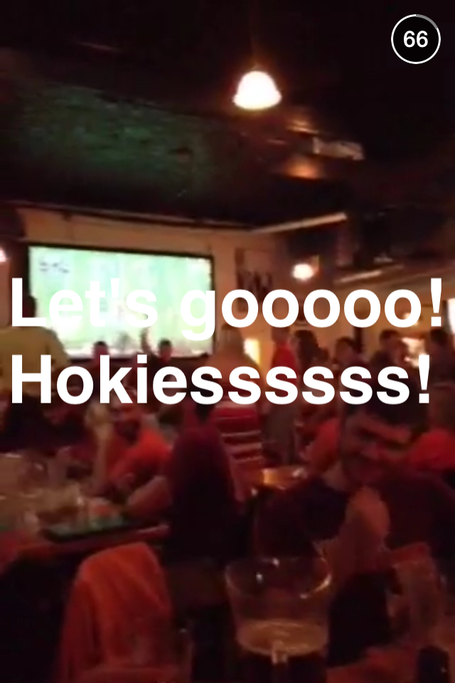 (The fist pump from my newly made friend, Matt is priceless.) 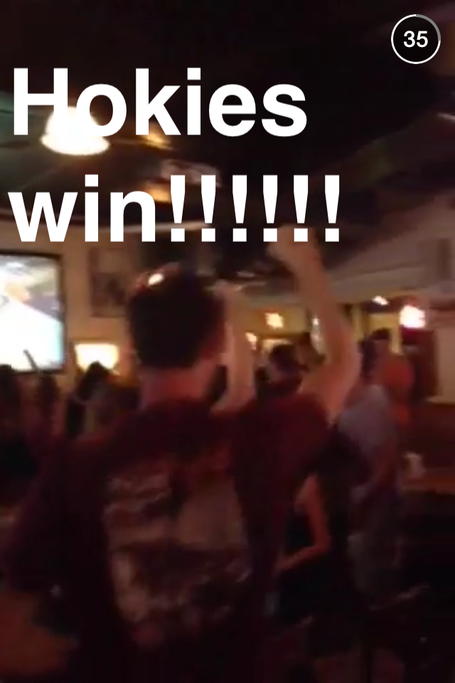 From there, everyone was in the, "I can't believe we just won phase." Then everyone was so excited and couldn't decide on where to go to next. So naturally, my group of friends meandered outside to discuss the issue. Everyone was jumping and hollering along Main Street. We intended on going to TOTS, but were convinced that everyone else had the same idea for celebratory Rails, so the next idea was to go to Rivermill to celebrate with the best Irish Car Bombs around. We made it there and we stopped outside the entrance to wait for some other friends to catch up. While waiting, I decided that my friend, Matt from earlier looked very similar to quarterback Michael Brewer and joked that Brewer already made his way back to Blacksburg to help celebrate. I don't know. You decide. 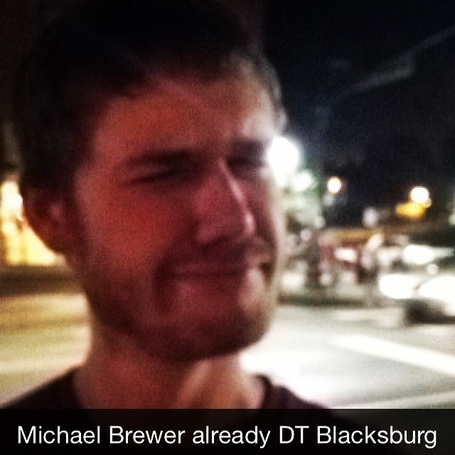 From there we said, "What the heck are we going to Rivermill for? Hokie House it is!" Then on our way there the atmosphere changed quite a bit. Passersby were yelling louder, jumping higher, giving out painful and sloppy high-fives, stumbling to give me and others pats on the back and hugs. Then car horns started reverberating through the streets as passengers leaned out the car windows and slapped extended hands, and girls peered out of sunroofs smiling and waving.

Now there wasn't much going on once we entered Hokie House. My friend, Kyle and I stayed for a beer and left after a half hour. But what we saw when we left and walked toward Main Street is what is being called the "Virginia Tech Riot." Now it wasn't violent. It was just the best fans in the world being excited for the best thing that's happened to Virginia Tech football in ten years! People might say, "Oh, act like you've been there before." Well it's been a while, folks. This was the game that Tech had to win if it wanted to be in the playoff picture. And Tech won. If the Hokies run the table and win out, the only team standing in the way of the playoffs will most likely be Florida State in the ACC Championship Game, who is looking good but not as good as last year. Tech has made one, just one National Championship run. And that was nearly 15 years ago. It may be time for the Hokies' second crack at it. 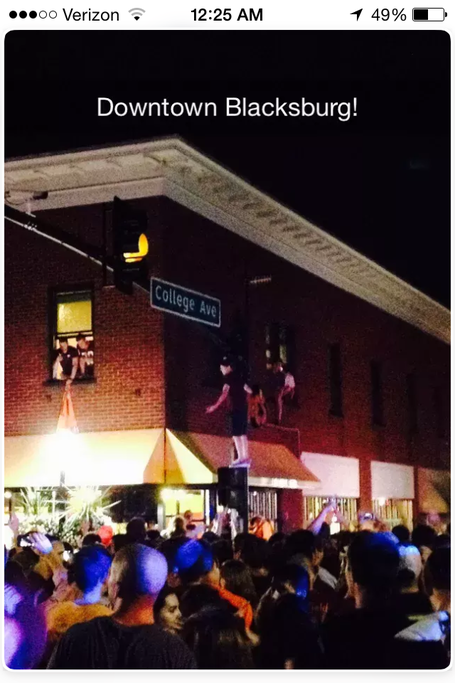 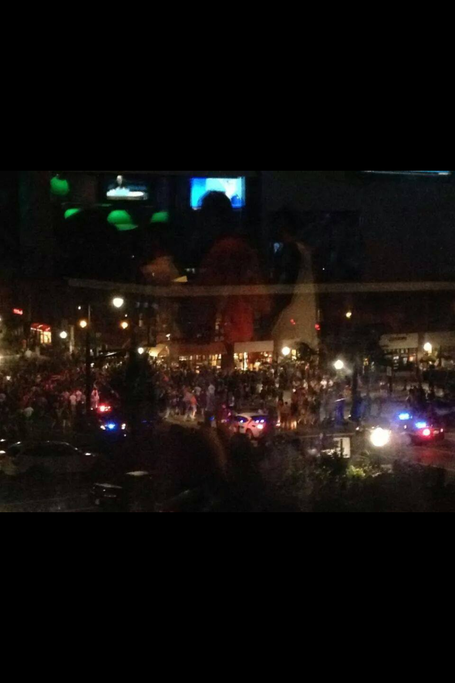 See, I graduated this past May. This was my first time back in Blacksburg since then. I made the decision to go this past weekend because I knew that if Tech upset Ohio State and I missed the celebration that I would regret it for the rest of my life. And boy, did the Hokies in Blacksburg celebrate. I didn't get in the middle of it, I mainly stayed around the edges, but yes, I did my share of jumping and chanting "Let's go, Hokies!," "Go, Tech, Go," the not so nice UVA and OSU chants, (Yes, they chanted about UVA and we didn't even play them because why the heck not?), and the always patriotic "U-S-A."

I miss going to class (yeah, can't believe I said it either), meeting new people, making new friends, going to games as a student, covering games as a reporter, and talking with players. I miss seeing Tech clothing wherever I turn my head, and I miss the buildings made of Hokie Stone. But most importantly, I miss the comradery and being a collective whole as a community because that's what Virginia Tech is all about.

So to answer the question, "Was the riot called for?" I say the answer is, yes. It was a celebration out of pure joy and love of our fellow man and for the love of football. And this piece was never supposed to be about me and my longing to be back at Tech, it's supposed to be about us. It's about all the Hokies coming together as one, being happy for the football program, and being excited about football again. This was the hump Virginia Tech football had to get over to climb back into the national spotlight again. No more, 'They can't win on the big stage." It's time for the Hokies to turn things around, push for a National Championship run, and win one for Frank Beamer, who'd die for this football program.

So be happy about the win, cherish it. For the players, it's time to focus on East Carolina. My advice for the students: don't ever graduate, stay there as long as you can, enjoy every living second of being a part of the best community in the world, and love one another. And to all the alumni: I'm so proud to be a Hokie alumnus, and I can't wait for all the memories yet to be made when visiting Blacksburg in the years to come. 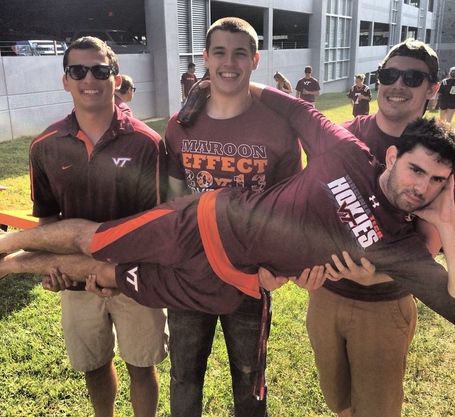