BLACKSBURG, VA (December 20, 2020) – America Runs on Dunkin’, as do many college students, and Dunkin’ understands that being a college student is tough--it takes time, effort, and lots of coffee. Dunkin’ is excited to announce Virginia Tech’s Cara Lewis as a new addition to Team Dunkin’, the brand’s recruiting class of 31 student-athletes from colleges and universities nationwide.

Cara Lewis is a senior middle blocker who played her first three seasons with the University of Maryland Terrapins. Lewis started in all 20 matches as a sophomore and had at least one block in all 20 matches. Lewis tallied a team-best 126 blocks for the Terps and was ranked first on the team, second in the Big Ten, and eighth in the nation with 1.54 blocks per set, the best by a Maryland player since 2006.

As part of Dunkin’s collegiate name, image and likeness (NIL) partnerships, these student-athletes, representing 13 teams from colleges and universities all over the country, will be sharing their experiences across social media and enjoying exclusive Team Dunkin’ merch to sport on and off the field. And to make it extra special for home-team fans, Team Dunkin’ athletes will be honored by having their favorite Dunkin’ drink featured at a participating Dunkin’ location in their college town.

"College sports fans are as passionate about their teams as they are about Dunkin’. That’s why the brand is supporting college athletes on and off the field through Team Dunkin’," said Melissa Goulette, field marketing manager, Dunkin’.

These powerhouse athletes, like so many college students, run on Dunkin’, and Dunkin’ is here to energize a growing roster of students through wins, losses, and the daily grind of being a college athlete. Stay tuned to each athlete’s social media channel for more details on when and where to grab each athlete’s go-to Dunkin’ drink. 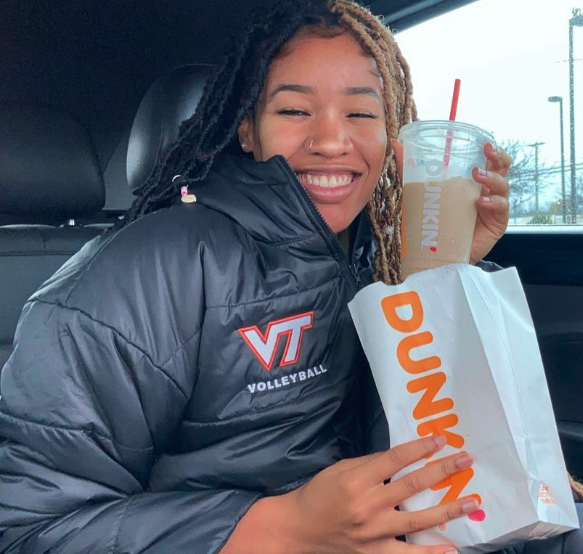 Founded in 1950, Dunkin' is America's favorite all-day, everyday stop for coffee and baked goods. Dunkin' is a market leader in the hot regular/decaf/flavored coffee, iced regular/decaf/flavored coffee, donut, bagel, and muffin categories. Dunkin' has earned a No. 1 ranking for customer loyalty in the coffee category by Brand Keys for 14 years running. The company has more than 12,600 restaurants in 40 countries worldwide. Based in Canton, Mass., Dunkin' is part of the Dunkin' Brands Group, Inc. (Nasdaq: DNKN) family of companies. For more information, visit www.DunkinDonuts.com.